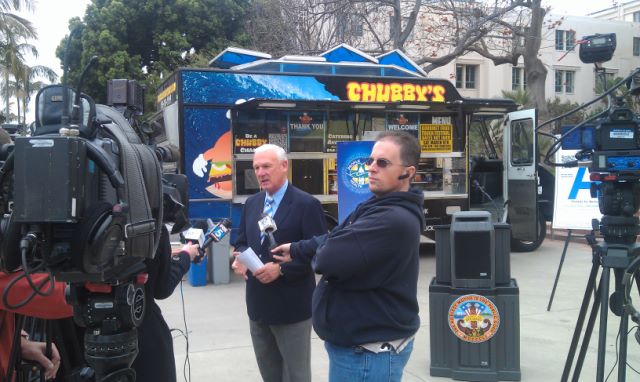 MCAS Miramar will have gourmet food trucks on their base as a temporary lunch solution while their main food court is closed for renovation. Four gourmet food trucks will be parked in front of the Marine Corps Exchange store daily from 11am to 2pm, now through April 2013. The weekly truck schedule can be found here.

This event is open to those with access to the base (not the general public).

All proceeds benefit San Diego Fire Rescue Foundation. With every order from Crabcakes911 you get 20% off purchases from the Pacific Beach Shore Club where you can watch the Ravens vs Broncos game, too!

A new truck will be hitting the streets soon!

The owner, Michael, runs the truck with his cousin Stacey. Michael had worked in kitchens since the age of 18, including in some of Las Vegas’ best fine dining restaurants.

He says, “The menu idea spawned from our love of great food but also a love of sharing and having variety when we eat. We went to get lunch one day and both couldn’t decide what we wanted and thought ‘Man, it would be great to try it all.’ That’s what we love about our concept–with options to buy either one single slider or our three-pack, it’s great for sharing or having a variety of food.”

There’s no definite grand opening date yet, but I will keep you posted!