Sign on San Diego has definitely had its finger on the pulse of the food truck scene in SD with lots of mentions of food trucks lately.  Read their recent Follow Friday “Twitter foodies you should know” featuring SDFT!

“Sign On San Diego” Does Video Piece on Food Trucks

Click here to view the great piece Sign on San Diego did about food trucks (click the link and then select “4SD-Food Trucks” from the list of videos).  I love that they took the time to interview multiple trucks!  Included are India on Wheels, Corner Cupcakes, Green Truck, and MIHO.  It’s very well done, and I’m not just saying that because they mentioned my blog. 🙂  Congrats truckers!!! 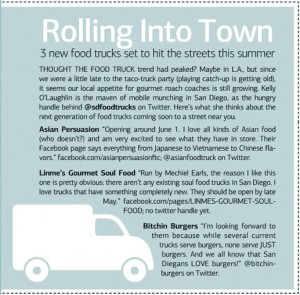 In the June 2011 issue, San Diego Magazine asked us which not-yet-opened trucks we were looking forward to.  Here’s a link to the full issue.

The Cooking Channel is filming Mangia Mangia Tomorrow- Be There!

The Cooking Channel will be filming Mangia Mangia during lunch at 1231 Cave St in La Jolla tomorrow, Wednesday, April 27.  The footage will be for their show about food trucks, Eat St. Bring your friends and see if you can get on camera!  I’ve seen an episode and they do seem to show some short clips of people enjoying and commenting on the truck’s food.

SDFT, Devilicious and Joes on the Nose Interviewed on KPBS Radio

San Diego Food Trucks (as in, me) was lucky enough to be interviewed along with Devilicious for Marissa Cabrera’s KBPS article, “Food-Truck Rush Sweeping San Diego“.  There is also an audio clip on that page of her story that aired on KPBS.

We also did an interview on the air with Marissa and These Days host Maureen Cavanaugh as well as David Wasserman from Joes on the Nose drink truck.  You can listen to the audio here.  We discussed the growing food truck trend in our city, truck cleanliness, where trucks mostly park, and more.