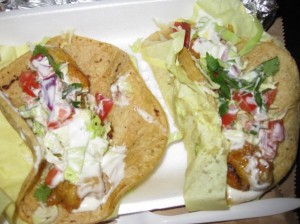 A few weeks ago, a poster to this blog asked why I did not include taco trucks like Mariscos German and Manny’s in my “definitive list of gourmet food trucks”.  To me, the answer was clear – they are not “gourmet” food trucks (or GFTs).  But what exactly does that mean?  I have a lot of love for the $1 Mariscos German fish taco, and I would dine there as much as any of the other trucks.  So why aren’t trucks like them included in this GFT craze?  Who is to say that fish taco is any less “gourmet” than something from one of the GFTs?

For me, the biggest difference is that GFTs use Twitter and Facebook and often have websites, so it is easy to track them.  A lot of the “non” gourmet trucks seem to always be in the same place and don’t use social media or websites.

I asked the illustrious San Diego Food Trucks Facebook fans this question and their collective brainpower and worldliness totally schooled me.

END_OF_DOCUMENT_TOKEN_TO_BE_REPLACED 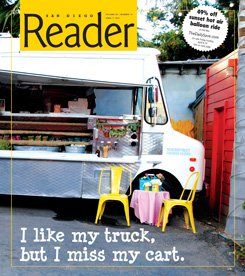 The cover story in the recent San Diego Reader is titled, “I Like My Truck, But I Miss My Cart” and is a lengthy article with interviews from MIHO Gastrotruck, Tabe BBQ and Manny’s Taco truck.

Some observations and interesting points from the article: The author, who is visiting Tabe as they are parked behind The Office bar in North Park, asks why they can’t park where the public can see them:
“I’ve been given a ticket for ‘selling on a public road.’ You’re not allowed to do that. You could be blocking a public right-of-way. That was $258, in Hillcrest. That scared me from parking near the city on the streets. But I don’t know why we should be hiding back here.”

Great quote from Tabe:  “And, yet, we add life to the city. It should be welcoming us.””

It also tells the story of Manny’s Taco Truck.  The owner (Manny, of course) apparently used to own a taco cart then the city told him he had to get a truck even though he didn’t want to.  The cost of the truck and the difference in the work environment sound like they have been tough for him.  The title of the article, ” “I Like My Truck, But I Miss My Cart” is his quote.