Eat St. on Location in San Diego This Weekend!

Eat St. is a show all about food trucks from the Cooking Channel and Food Network.  They will be filming 4 trucks in San Diego this weekend!  You may recall that they previously featured Mangia Mangia in episode 1 of season 2.

Show up to one of these locations and who knows – maybe you can launch your TV career!  At the very least, you get to see how a TV show gets filmed.  The show would love to have a good crowd, so please show your support!

Sorry folks, I have been told this event has been cancelled. 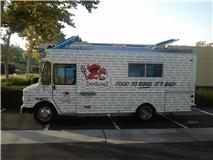 The owners of KalbiQ & Devilicious have just announced that they are morphing KalbiQ into a second Devilicious truck!  See the pic of the new truck here (from KalbiQ’s Facebook page). The San Diego Lantern Festival is this weekend and some trucks will be there serving up tasty eats: Devilicious, Asian Persuasion, Food Farm, Mangia Mangia, Super Q, Two for the Road.

Check out Living Social’s deal today for $12 of food for just $6 at Devilicious!!  That makes for one affordable lobster grilled cheese!!!